“So, as it turns out, unless you’re a young child or a prison inmate, you don’t need anyone supervising you. People just come in and do their work on their schedule. Imagine that.”

There are lots of great quotes from The Office that translate to real life, but this particular line from Jim Halpert is one of the best. That’s because Jim is actually describing a well-functioning, self-organizing team — the backbone of Scrum methodology.

What is a self-organizing team?

A self-organizing team is exactly what it sounds like: a team that organizes themselves into action.

A traditional team would need to wait for a manager to sign off on an idea before getting started. They may even have to wait for further directions or instructions, too. This approach takes extra time, extends deadlines and — most importantly — costs the company money. A self-organizing team will identify what tasks need to be done, when; prioritizing and managing their own deadlines.

The key characteristics of a self-organizing team

This might be obvious, but a self-organizing team needs to work together. Without a manager to push them forward, it’s down to the team to communicate — and collaborate — to complete the task at hand.

While the Scrum master will be there to help coach your team through any tough patches, the team needs to know what they’re doing. Autonomy won’t be possible if the team is constantly waiting to be told what to do — or how to do it. This is why it’s important to pick your teams carefully, ensuring a good blend of skills and talents that, together, really shine.

Self-organizing teams are also self-governing — there’s no figurehead telling you what you’re doing well and what you need to improve on. This can cause problems if the team shies away from intra-team feedback. Members of a self-organizing team also need to be able to seek out their own growth opportunities in order to improve their skills. 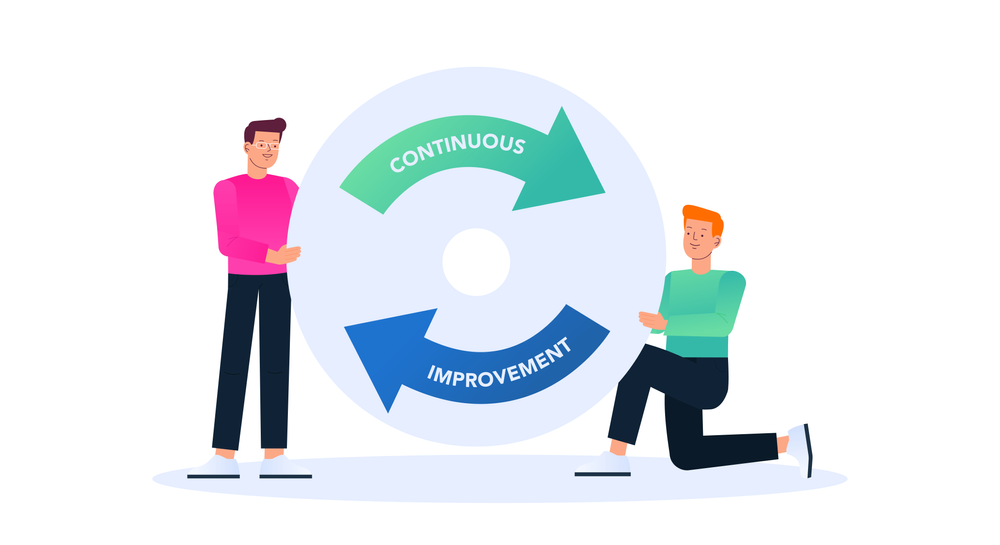 There is no one to hold you accountable to your mistakes within a self-organized team. For a team to run effectively, every team member needs to be able to take ownership over their work — mistakes and all.

If a team member can’t own up to their own mistakes, you’re going to end up with a backlog of issues building up with no explanation as to how they happened in the first place. That means starting from square one, rather than simply working backwards to fix the issue.

Conflict within teams is inevitable, especially without a traditional management figure to oversee proceedings. Team members need to show respect to their co-workers — even if there’s a difference in opinions. The workplace isn’t a place for personal issues and a great self-organized team is made up of people who understand that.

4 benefits of a self-organizing team

Self-organization is a simple theory, but it can deliver an enormous positive impact.

Having your team work autonomously is already a great benefit, but let’s dive into some of the other reasons to adopt self-organization:

Since teams are already working in an Agile manner, they can adapt to customer and market needs at the drop of a hat — as no one has to wait for a manager’s approval. Teams can work at their own pace, find their own rhythm, and start putting out consistent work. Team members can also prioritize workflow based on their own skills and hit deadlines with ease.

Self-organized teams are far more likely to assign the right person to the right job. Traditional managers will often organize projects by who has less on their plate at the time, assigning tasks accordingly. That seems like a great idea to keep workflow consistent, but it means someone may end up with a task that they’re not so confident with. That tends to result in lower quality products and lower customer satisfaction at the end of development.

A self-organizing, autonomous team has no use for the extra resources that a manager offers up. Simply put, that means less money wasted to an unneeded figurehead and less time wasted on admin that the team could just do themselves.

However, it’s not just the customer that feels the benefit at the end of a sprint or project. With no one to micromanage their efforts, team members can feel more comfortable and empowered. They can work at their own pace and in their own way, rather than worrying about having to conform to the manager’s timeline or standards.

Despite the benefits, there’s a reason why self-organized teams aren’t the norm. Autonomy and freedom can be wonderful for team members, but from a company standpoint there are a few potential issues that we need to address.

Thankfully, as seen in the Agile Alliance guide, these issues are easy to resolve. Let’s take a look at the main challenges you may face — and how to resolve them.

Self-motivation can easily lead to team members becoming more introverted. If everyone is focussed on their own tasks, then you can’t be surprised if there’s a breakdown in communication within the team.

Following Agile ways of working requires everyone to be able to handle sudden changes, so keeping everyone in the loop is vital. Daily standups and weekly status meetings are still essential, even if only to update the rest of your self-organized team on what you’re doing.

Lack of accountability is one of the most common challenges in self-organized teams. A quick look into this style of working may present red flags, such as reduced efficiency and a lack of individual accountability.

The entire team is responsible for the project, rather than a single figurehead. This means everyone needs to attend meetings and interrupt workflow. With that shared responsibility, it makes it much harder to hold an individual person accountable for specific tasks or mistakes. By the time it comes to the sprint retrospective, there’s no way to identify ways to improve, because no one knows what the mistake was or who made it.

So how do you avoid this issue? It all comes down to team dynamics and trust. If a self-organized team member feels connected to their colleagues, then they’ll want to help the team succeed. Don’t skip on the team bonding activities, basically!

Homogeneous teams tend to struggle with creativity and innovation; different mindsets bring different advantages and having a diverse group can lead to great things.

Unfortunately, the variation between personalities can lead to conflict, too. Without a traditional manager to step in and resolve the issues, conflicts within a self-organized team can continue to escalate. That’s a recipe for disaster.

Communication is essential here. If you see an issue emerging, raise it and talk it through. 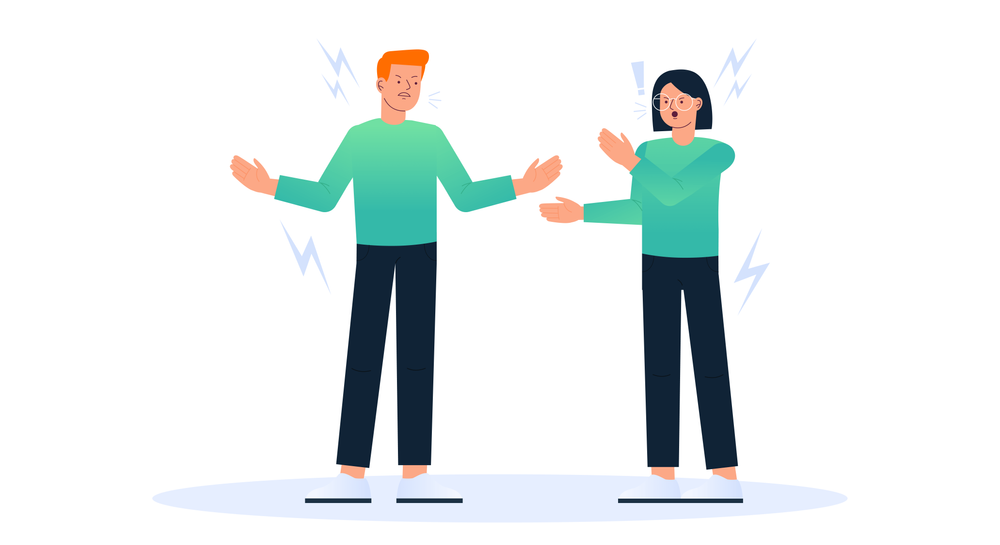 Trying something new in the workplace can stir up a bunch of excitement and boost morale. However, old habits can return without the guidance of a traditional manager to oversee the self-organized agenda. This is one of the biggest issues for upper management, who may see the potential for reduced output.

Again, everyone in the self-organizing team has to be inspired to succeed. If you feel the wheels grinding to a halt, don’t just stand by and watch it happen.

How to build an Agile self-organized team

There are very few employees who can be dropped into a self-organizing structure and run with it right away. That doesn’t mean you should steer clear from self-organization, though, the key is to pick out the right people for the team with the right skills for the tasks ahead.

Once you’ve selected your team, there’s a few steps you need to take to prepare them for their new way of working:

Self-organization will look different for each team member, so preparing them for how it’s going to work is key. It’s not a case of “off you go, get to work” — there are principles that the team need to understand before diving in headfirst. They will also need training on the framework required to work this way and the skills required to communicate better.

The initial stages of transitioning into becoming a self-organizing Agile team can be difficult. In a study by Alistair Cockburn, many participants described the transitioning phase as “a war”, “challenge”, “struggle”, and “difficult”.

This may seem counterintuitive but having an extra team member who can coach the core team through the transition can make a huge difference. Of course, as the project goes on and the team starts building confidence, the coaching role can be gradually phased out.

As self-organization becomes second nature for your team, they need to know how they’re progressing. The former coach will need to check in from time to time and ensure the team’s skillset is growing and work is staying balanced. These mentoring sessions aren’t about micromanaging, they’re about ensuring the team is growing together.

Give your self-organized team the tools to succeed

Proper tooling makes the transition to self-organization easier — and that’s where EasyRetro comes in.

Our platform is simple enough for the whole team to use and flexible enough to handle any task you need to complete. Slack integration, easy export, and “access-anywhere” functionality ensure better communication, even in remote working situations!

Start working smarter with our free plan, or try a free trial today to see how EasyRetro can make Agile working even more efficient.