At EasyRetro, we live and breathe sprint retrospectives.

These sessions are a fantastic way for teams to review what went right and what went wrong during iteration sessions — especially with our fun and engaging templates!

A retrospective isn’t designed to be a long, drawn-out meeting. It’s designed to highlight issues that need correcting and identify positive actions in a short amount of time. That way, the development team can head straight back to work with a strong sense of direction.

While most seem to grasp the concept well, we do hear one question more often than the others: “when should we be holding a retrospective — and how often?”

These are tricky questions to answer, as you can technically host a retrospective at any time. However, sprint retrospectives are very particular tools that need to be utilized correctly, creating some ground rules for teams to follow.

So let’s dive in…

When is the right time for a retrospective meeting?

Retrospectives are a time for teams to reflect on what they have learned and are a cornerstone of nearly all Agile project management methodologies. They should take place at pivotal moments in your project timelines, such as launching a new feature or reaching an important milestone.

When work is divided into sprints — as it is in most Agile methodologies — scheduling retrospectives is a little more rigid. As the name may suggest, sprint retrospectives are held when a sprint is completed — and, traditionally, immediately afterward. That way, everything is still fresh in the team’s mind and will give a more accurate representation of what happened during the sprint.

How often should a retrospective meeting happen?

There’s no “one-size-fits-all” guidance as to how often you should hold a retrospective meeting. That being said, if we use sprint lengths as a guide we can map out a rough schedule for how frequently the retrospectives will run. 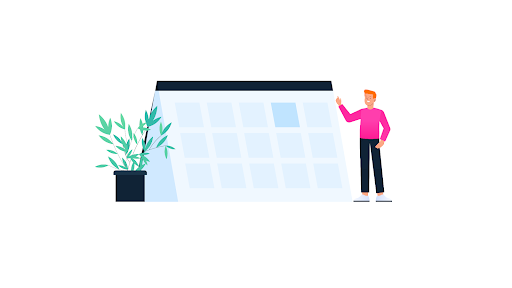 If your team prefers to work with longer sprint times, you may only need a retrospective once every couple of months. It’s recommended to treat sprints as short bursts of productivity, so you may have one or two retrospectives per month.

Finding the perfect balance can be a difficult task, as too many or too few retrospectives can be equally detrimental to the overall project. Retrospective meetings need to be held frequently enough that they maintain their usefulness, but not so sporadically that key issues have time to be forgotten.

Sprint retrospectives: getting your timing right

Let’s briefly look at the issues that can occur if you fail to maintain a healthy balance.

When you have too many retrospective meetings…

A retrospective may be the only time you have to come together as a complete team, so you have to make it count. They need to be focused, interactive, and serious about improvement both personally and as a team.

That’s not to say don’t have fun with it — we’re all about making retrospectives fun. But your team needs to respect the process and understand why they’re doing a retrospective.

If you start hosting too many retrospectives, your team is going to burn out very quickly. They may start to feel pressured to achieve perfection in every task and end up trying to work at an unhealthy pace. They may also stay quiet when they have an issue, rather than stand up in regular meetings and gain insight to help them improve.

Another issue with holding too many retrospectives is that they end up feeling like a regular, boring meeting. Instead of engaging fully, team members spend their time looking at the clock, thinking about the work they could be doing instead.

Finally, filing your calendar with retrospectives is going to leave very little time to actually do the work discussed. The list of improvements will keep piling up as the team tries to work towards their new sprint goals.

And that’s no good for anyone’s morale or wellbeing.

When you have too few retrospective meetings…

Retrospectives are a chance for your team to voice any concerns or observations they have about their work. It’s an invaluable learning opportunity that will have positive implications as the project goes on. So when retrospectives are too infrequent, it removes the support system that is there to identify and tackle issues.

We’re also very forgetful as a species. Unresolved issues that crop up at the start of a sprint have the potential to cause major obstacles down the line — while a regular commitment to retrospectives nips problems in the bud before it’s too late.

For those issues that do roll into roadblocks, the lack of accountability can quickly turn into toxicity. There’s a chance that the person who made the mistake in the first place has forgotten what they did, which can lead to frustration. Blame is thrown around the team and with no clear answer to how the issue happened, it can spiral into a deeply negative situation.

Something that often gets overlooked is the effect retrospectives have on your team’s mental health. Retrospectives are all about opening up and sharing what is and isn’t working for you. Importantly, they are also about receiving validation from the team. Regular, well-run retrospectives can let your team know that they are respected and valued as an individual — not as a tool for completing tasks.

The retrospective is not just a time to evaluate work, either. It also serves as a time for teams team to connect. Having too few or too many retrospectives reduces the amount of time the team gets to have valuable interactions and quality team-building. Either by needing to fit as much work as possible into a rare meeting, or zapping the team’s energy with too many meetings.

This is even more important during this time of remote working. As many companies transition to full-time distributed working, team morale could take a serious hit if they’re not afforded the right amount of time to bond and collaborate.

How long should a retrospective meeting last for?

Retrospectives are not meant to be perfect presentations and lengthy discussions. In fact, that’s the opposite of how a team should operate — that’s just not how Agile works! Avoid long introductions and stick to the valuable information that’s needed to proceed.

To avoid running too long, consider a loose structure such as this example from a single week sprint:

Putting a structure in place for retrospectives isn’t essential, but can help cut down on wasted hours. If you’re having issues with your retrospectives taking too much time, we have some great tips on streamlining the process right here!

Another common question we get at EasyRetro is about who needs to be in a retrospective.

Realistically, you only need the team members that are actively working on the project to run an insightful retrospective. However, outside opinions can be valuable too — and could make the difference between a product’s success or a product that flops.

For a deep dive into who should and shouldn’t be involved in a sprint retrospective, check out one of our earlier blog posts.

Finally, the key to a successful retrospective is visualization. And there’s no easier way to visualize your retrospectives than EasyRetro. We have hundreds of easy-to-use templates, insightful guides, and almost everything else you could ever need to run your sprints.

Get started for FREE today!

Create an account and help your team to be better everyday.

EasyRetro former FunRetro
—
When should a retrospective meeting be held — and how often?
Share this